MISTI-Con 2015 is excited to welcome the following performers: 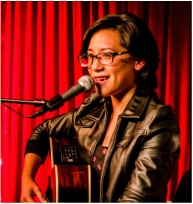 Ashley "Trix" Hamel
Ashley "Trix" Hamel is a multi-talented performing artist. As a singer-songwriter, she performs solo wizard rock and Muggle music. She frequently collaborates with fellow wrockers Grace Kendall, Lauren Fairweather, and with her band Bella and le Strangers. Ashley also improvises with her comedy troupe, The Great Make Believe Society. She is also a 2x Finalist in the the Miss Connecticut pageant, which is a hilarious and badass tale of triumph and tiaras. 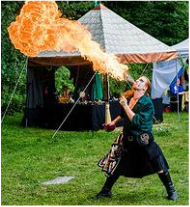 He has been voted as one of the Top Five Solo Variety Acts in the United States by the Renaissance Festival Podcast & Renaissance Magazine for Five Years In A Row ﻿ Daniel has been featured in Two Independent Film Documentaries: MAGIC CAMP and RENAISSANCE FAIRE: ONE YEAR OF BUILDING THE PAST.

﻿"The Magic of Daniel GreenWolf" is a show that takes highly visual magic, theatrical storytelling, exhilarating irish music, interactive comedy, & thrilling danger and wraps it in a celtic theme that has been described as "A witty, modern-day Celtic Viking. Like James Joyce with a broad sword."

Platform One
Platform One is a band of highly energetic musicians who bring together danceable beats, well thought out lyrics, and an appeal that crosses all genres. A combination of pop, gothic, alternative with a side of oontz, Platform One ranges in fluence from And One to the The Psychedelic Furs, and Peter Gabriel to The Cure. They've spent the last few years playing festivals and conventions, from steampunk to goth, all over the Northeast with forays to the West Coast and New Orleans. 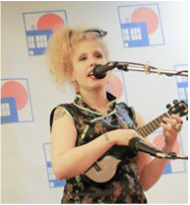 Cat Smith
Cat Smith is the reigning Miss Nerdstiles, having inherited the crown from absolutely no one, because she made it up. She is an actor, a musician, a cosplayer, and a general nuisance (General Nuisance *salute*). She and her ukulele have charmed the collective socks off of LI Who and LI Geek (as the house band, no less), ReGeneration Who, Wicked Faire, and The Way Station. You can find her on YouTube and Instagram as deadlightsgirl, and her favourite drink is a strawberry margarita, in case you were wondering/buying.