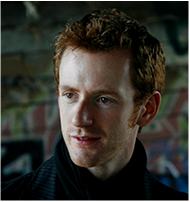 Chris Rankin
Chris Rankin is an actor and producer for theater and film living in Wales, United Kingdom. Originally from Auckland, New Zealand, Chris moved (with his family) to Norfolk, UK, at the age of six. At age eleven he began acting in school and, at 17, he was cast as Percy Weasley in Harry Potter and the Philosopher’s Stone. Chris currently works on the BBC production, Atlantis, as Assistant Coordinator.

Chris has been a regular at many conventions, but this is his first visit to a MISTI-Con and we are incredibly excited that he will be attending.

Chris will be participating in a Q&A during the Wizarding World's Fair, presenting his own paper on his experiences in the fandom, and doing photo and autograph sessions. Please check back for specific times and additional pricing information.